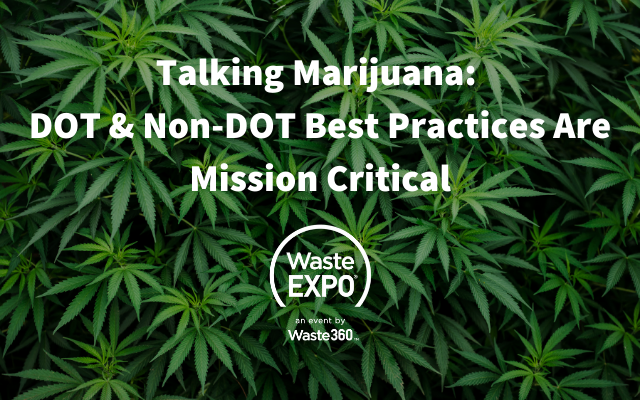 How is the waste and recycling sector dealing with the question (and legality) of marijuana use by employees? At WasteExpo 2022—North America’s largest waste, recycling, and organics tradeshow—a popular session focused on this important question and more.

The “Marijuana (and Other Substances): DOT & Non-DOT Best Practices” session looked at how administrations on the federal and state level are introducing new opportunities and challenges for the waste and recycling sector, including ever-changing laws that impact medical cannabis, CBD, and workplace drug testing. Compliance and safety are always key concerns for haulers; this essential industry puts large trucks on the road every week. Staying up on the latest regulations, and sharing best practices, is mission critical.

Cardamone first addressed DOT regulations because those are the most “cut and dry; at the end of the day, federal regulation is ‘no marijuana;’ that’s it.” But, in working at a testing company, he often sees misunderstandings: “A driver might say, ‘oh it’s legal in my state, now I can do it.’” He asked the panelists what they are seeing.

Mandel noted that Waste Connections has some operations in New York, a state that has recently passed some tighter restrictions around the use of marijuana and the ability of the employer to take adverse action against employees found under the influence, “basically saying you’re prohibited from terminating those individuals. [But] unfortunately the union that we deal with had some questions about their interpretation of that.” Ultimately, he emphasized, “it really is the federal rules that trump those state requirements.”

Vellutini noted that, “For us mostly, I think it’s educational. In Florida, where a large part of Waste Pro’s business is, I think it was two years ago that marijuana was legalized, and we had to really quickly get on top of the misinformation; just the buzz that runs through where drivers thought, ‘hey we can do this.’ We put together an informational poster that we actually put through all ten states, setting the record straight about what was really happening. We even handed out a printed letter that’s now ten, twelve years old from the head of the DOT where he just emphatically says that federal law trumps state law, so don’t do it.” We also had a lot of drivers who were using CBD oil and had to work through disinformation that went around [about that].

Hoboy brought up the topic of interstate versus intrastate business. Some of the arguments her company has heard include, “Well, we’re an intrastate driver.” In other words, “The driver never leaves that state, so how do the federal rules apply?” GFL has tried to “make it super clear that if you’re driving, you’re in a safety-sensitive position, it’s not legal; it’s not acceptable.”

Cardamone then asked the speakers about non-DOT. He noted that, “from a policy standpoint for non-DOT, you have to have a clear-cut, very well-written policy. How often do you guys review that?” Mandel said that Waste Connections reviews it “at least on an annual basis; we have a group of HR professionals, our legal team, and our safety and risk folks, that will get together and take a look.” He went on to note that, “there are obviously state amendments that we have to the policy to ensure we’re compliant.” Also, “when changes come down at the state or federal level, [for instance], I know right now there are a lot of discussions around the oral swab testing, and there are some aspects we’re questioning if it goes through—so we’re always having discussions about it, but formally we’ll sit down about once a year.” Hoboy agreed and noted that, “we’re looking at the option of eliminating marijuana from our non-safety-sensitive positions.” Cardamone observed that this is a “huge trend.”

The discussion turned to how frontline employees can help each other to stay safe and be accountable when it comes to marijuana use. Hoboy recounted an accident that took place due to a worker having marijuana in their system—and she wondered why the driver did not speak up about the potentially unsafe condition. Now, “we’re trying to have the conversation and say, ‘look, this is about your teammates. You are in it together. If you see someone in that kind of trouble, it’s not funny; it’s not fun. This is serious business.” Mandel agreed and said it’s all about “empowering your folks.”

Yoga and Cannabis: A Meditative Match Made in Heaven