Last Sunday, I hung out in the Flevopark in Amsterdam for the 8th annual Cannabis Liberation Day. In Dutch they call it “Cannabis Bevrijdingsdag”, which has the rather fitting acronym of CBD, and this year the hashtag #CBD2016.

The free festival kicked off at 14:00 along with the rain. I ate tapas in a cafe located not far from the rear entrance to the park with my travelling companion and watched the heavy rain lash down on the cyclists and pedestrians making their way to the festivities.

“The Stud” coffeeshop over the road was making a booming trade.

In this quiet neighbourhood southeast of the city centre, this kind of windfall literally comes only once a year. One of the festival house rules is no selling of cannabis, so those hoping to enjoy the lazy Sunday afternoon medicated were stocking up whilst avoiding the now torrential downpour.

The designer sneakers of the runners who kept them in stock via the back door must’ve been completely worn out by the end of the day. Jeroen, co-owner of the Coffeeshop Club Media in the trendy creative area of De Pijp (The Pipe), explained to me that coffeeshops are restricted to only carry 500 grams at a time on the premises; so as stocks get low the shortfall “magically appears at the back door. Oh look, 500 grams — thank you very much!”

However it arrives, this is one local business thankful for the festival that calls for tolerance and widespread use of all forms of cannabis and highlights the challenges that criminalization of the plant creates for cannabis consumers, coffeeshops and cultivators. 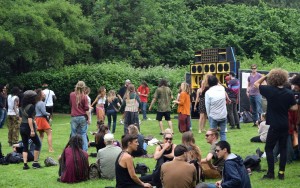 Nicole Maalsté, a sociologist researcher and author, told me “not only should people have the right to know what they are consuming; people must be educated that they need to know what they are consuming.” She is currently gathering information on cannabis consumers in Holland via the Grass Poll. “We don’t know what cannabis consumers want? Where do they get their information about cannabis? How would they prefer to buy it? What do the police want? Society doesn’t know all this because we have never asked. That’s what we are doing with the Grass Poll.”

The “broken back door” means there is no way to ensure what is discretely sold through the premises is safe. The product cannot legally be tested nor grow operations inspected.

A common misconception is that cannabis is legal in Holland. This is not the case. The growing of more than five plants is strictly illegal and enforced as such. This makes it impossible for the tolerated coffeeshops to remain fully stocked without turning to an unregulated black market.

Cannabis is not free yet in the Netherlands, hence the need for Cannabis Liberation Day.

The rain subsided and we decided to make our way to the festival. Thankfully, that was the one and only time it rained. We made our way through the avenue approaching the stage, which was lined with stalls selling the usual cannabis related paraphernalia. I picked up a couple of glass spoon pipes as gifts — for a very reasonable five euros a pop. 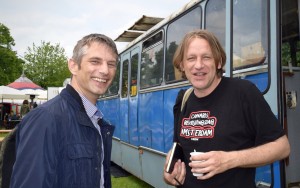 My guide for the day was Mich Degens, chairman of Mambo Social Club in Hasselt, Belgium. He seemed to know one in five of the people we passed and conversed merrily in Dutch as we slowly made our way to the VIP section. Not knowing any Dutch beyond “please” and “thank you”, I just smiled and nodded.

The crowd was not put off by the weather and, despite only starting an hour or so ago, was starting to build up. The vibe was very welcoming and chilled as you would expect. In fact, the rain earlier maybe helped in keeping a cosy atmosphere. Good for those enjoying the space — maybe a little nerve wracking for the organisers, VOC Nederland.

We entered the VIP area behind the stage and tracked down VOC Chairman and CBD2016 coordinator, Derrick Bergman. Conversation was limited to a “hello”, a handshake and photo op — as you can imagine he was kinda busy. Derrick had told me earlier that “now that the High Times Cup has quit Amsterdam, we’re the only cannabis and hemp event in the Netherlands.” 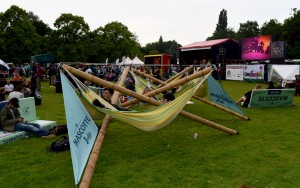 High Times had more or less been harassed off running their long standing annual Cannabis Cup by the Dutch authorities with raids in 2013 and 2014. In which, it is very fair to say, the police were incredibly civil and polite — to the extent they allowed people to finish up whatever was over the legal limit of five grams on your person in public before leaving the premises (with their five grams and a tale to tell).

Although not officially axed, the High Times 27th Cannabis Cup in 2014 was the last. Now that it’s possible for them to do the same thing on a grander scale on their home turf in the USA, the Cannabis Cup may never return to Amsterdam. CBD fills that void very nicely indeed. A June date rather than a November one is a great boost for those wishing to attend. I know from experience that November in Amsterdam can be grim.

Cannabis celebrities, such as Rick Simpson, mingled with ex-ministers, cannabis social club organisers and major players in the Dutch cannabis industry. We entered a cosy looking yurt that was quite possibly the greatest networking venue I have ever encountered. Free buds, beers, water and fruit were passed around as the heads inside conversed on comfortable cushions. 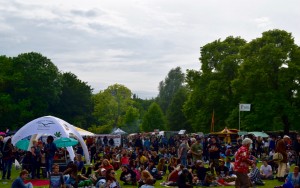 The sun and blue sky peaked through the opening at the top of the yurt, which was acting as the ideal chimney for the therapeutic herbs being burnt and inhaled by the occupants. I went solo and headed off to soak in the day from a festival-goers point of view.

I was now comfortably baked and at times like these, I appreciate being able to hide behind my camera and get some creative shots. After a nice chat with the doorman of the VIP zone, which always makes for a smooth re-entry, I saw the crowd had swelled significantly. There was no alcohol so the atmosphere was perfect. The toilets didn’t have massive queues and seemed in as good a state as you could hope for after being shared by a few thousand festival-goers. 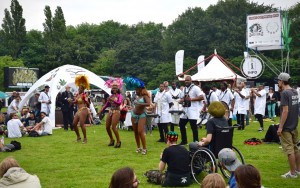 I made my way to the centre of the big field that was hosting the main stage to line up a shot with the giant cannabis leaf that was positioned over the sound controllers tent. I was just thinking how great this shot could be when a caribbean dancing troupe walked through the scene. Perfect. Click.

There was another area almost fenced off by the growing number of bikes surrounding the perimeter of the festival. Some skull vibrating far-out dub was booming to those dancing and lying in the field in front. They gently bounced off the floor like marbles on an open loudspeaker cone lying on it’s back. 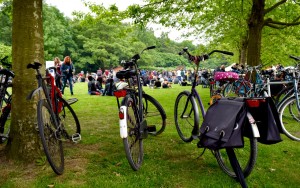 The crowds of happy revellers included toddlers right on up to those on death’s door, both wearing diapers. One guy, who seemed imminently about to part this world, arrived via ambulance and was carried around on a stretcher by medics. I was humbled to share his dying wish. It didn’t feel appropriate to capture this image in pixels and I hope my words are respectful enough.

I spotted two young lads, dressed the same, on mountain bikes off in the distance well away from the festival. They were wearing police uniforms, so I assumed they were the police. 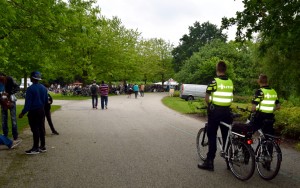 “We know what it’s like to be young,” one of them told me as the other nodded and gazed ahead at a field of people dancing, chilling, kissing and cuddling in the distance. “We’re young ourselves, this is a chance for two thousand people to come together and celebrate freedom in the park.”

I told them that the police presence was very low compared to the Cannabis Liberation Day that I had experienced in Antwerp recently.  “Security is provided by the event so we’re just patrolling the park,” they said.

I asked if they would ride through the festival. “We might walk through later, if we ride we may bang into and annoy people.” How considerate. I wondered how people would react to them. “There could be a few comments, some people simply don’t like the police.” I thanked them for their time, they posed for a picture and I made my way back to the VIP yurt wondering how could anyone not like these police?

On my way, I noticed the security that he was talking about, these guys were massive and had the hardened look of doormen. I’m sure they were having an easy day but I wouldn’t want to be the dealer getting caught by these guys.

Back in the yurt, I realised I’d left my share of our stash for the day with my wingman. Or maybe I was his wingman? Anyway, I didn’t have anything to smoke on my person so I headed to a low coffee table that appeared to be the bud bar and was handed a dense bud of around half a gram. I asked the tender if he knew what strain it was. He stared down into the bag between his knees (we were all on cushions) and, after a rather long pause for effect, held up his index finger and said, “No.”

No worries, given the standing of those inside I was convinced it’d be good and it was.

I smoked and shared my bud with some new buddies who in turn gave me a healthy blob of cannabis oil. They reassured me that although it was tested for 80% THC, it was not psychoactive thanks to being decarboxylated. I’m no scientific expert but 80% THC is 80% THC to me no matter what was done to it. I also thought it was the decarboxylation process that turned THCa into the psychoactive THC.

Maybe they were pulling my leg or maybe I misheard? I didn’t feel like labouring the point and quite fancied trying it so licked it off my finger. I then headed off to take in the show and some more snaps. The DJ was playing a dance remix of Bob Marley’s “Is this love?” and I was starting to believe that yes, it was.

This is how a safe and enjoyable festival can exist. With the absence of alcohol, the good vibes were infectious. Parents played with kids, young groups of people were just hanging out and dapperly dressed elders made out on the grass. The festival is a magnificent example of the benefits cannabis can bring to a society and gave me a real boost of optimism; not just for the cannabis movement in Europe, but the advancement of the human race as a whole. If you happen to be in Amsterdam next June, you could do a lot worse than attend Cannabis Liberation Day 2017.

All images courtesy of Percy Grower